Reflecting on Anti-Bias Education in Action: The Early Years

John Nimmo is an associate professor, Early Childhood Education, in the College of Education at Portland State University, Oregon. Previously he was Executive Director of the Child Study and Development Center and Associate Professor at the University of New Hampshire and is the coauthor of “Emergent Curriculum.”

Jillian Daley was the media writer for the Portland State University College of Education from 2019-2020.

Drawing on their work in Leading Anti-Bias Early Childhood Programs: A Guide for Change with Louise Derman-Sparks, John Nimmo and Debbie LeeKeenan are releasing their new short film, Reflecting on Anti-Bias Education in Practice: The Early Years. The film will release on April 1st for free streaming, along with a Facilitator and Viewer Guidebook.

Advancing equity and eliminating discrimination are Nimmo and LeeKeenan’s longtime passions, so it’s no surprise that their voices should be among those crying out for change. The 48-minute film features an analysis of anti-bias strategies in early childhood classrooms. What’s different about this film is its direct focus on teachers’ own reflections, rather than solely relying upon experts and research. This offers crucial insight into the complexities of practicing anti-bias teaching in real-life settings.

“The film’s significance is highlighted by the urgent need to disrupt systemic oppression beginning in the early years of life and to ensure that teachers are prepared to engage in and even provoke dialogue and action around bias and equity in early childhood,” says Nimmo, who is an associate professor in early childhood education at Portland State University. “While we understand the imperative for social justice and have the theories and research to understand the dynamics of oppression, teachers are calling out for models of how to engage in anti-bias practice that goes much deeper than multicultural curriculum and supports young children’s capacity to identify and act against bias.”

The Tyler Rigg Foundation, a Connecticut-based nonprofit, approached Nimmo and LeeKeenan after viewing a story about anti-bias education on a Public Broadcasting Service channel. Tyler Rigg was interested it meets its mission of furthering “social welfare, youth empowerment, disability issues and environmental stewardship.”

Debbie LeeKeenan, a Seattle-based early childhood consultant, and John joined forces and assembled a team. Internationally renowned social justice advocate and author Louise Derman-Sparks, who produced the first anti-bias film in 1989, is the senior adviser for the project. Filmmaker Filiz Efe McKinney of Brave Sprout Productions, as the director, is leading the filming of the teachers working with young students in Seattle and San Francisco.

“I see the grant as recognition of the importance of supporting teachers of young children to engage in anti-bias practices in the classroom in support of equity,” LeeKeenan says.

Teaching children who are navigating a complex society

To reinforce the message of the film and open opportunities for discussion, Nimmo and LeeKeenan also devised a written guidebook for educators to use the film effectively in their classroom and in professional development for both pre-service and in-service teachers. LeeKeenan explains that if teachers are going to lead anti-bias experiences in the classroom, they need to think about why they’re doing it, and that’s to guide children through the complex society in which they live and must someday lead. It’s crucial for teachers to not only model best behavior, but to listen and be ready to respond effectively.

“Be observant to what children are saying,” LeeKeenan notes, “and make a lot of decisions on the fly and figure out: How am I going to respond when a child makes a statement like, ‘I heard that a police officer murdered a Black person’? And that’s a real comment from a child.”

LeeKeenan explains that the teacher was honest and supportive in response. “The teacher not only affirmed the child’s observation and her shared anger as a person of color,” Nimmo says, “but went further in supporting the children to articulate their own statement about Black Lives Matter and to share it urgently with the school community.”

Nimmo says that the teachers they filmed were thoughtful, sharing their own reflections and uncertainties as they sought to implement research-based methods. They have much to contemplate. 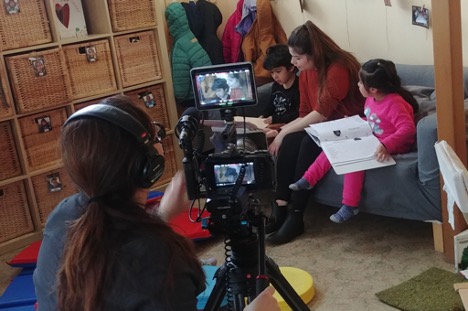 There are many more research-based ideas and new terms and practices to consider adding to lessons since the original Derman-Sparks anti-bias film came out in 1989, and this film will help make sense of the changes. There have been some other films that relied on experts’ views, but nothing with such an educator-centric and reflective focus.

“There were some new opportunities where people were willing to share their experiences in a really brave way that was really motivating for people,” Nimmo says.

He says with the Black Lives Matter movement empowering BIPOC people and so many other positive anti-bias voices being raised in unity and being heard that this is a good time to be offering this film. It feels like change is in the wind.