Writing for Real Is More Critical than Ever 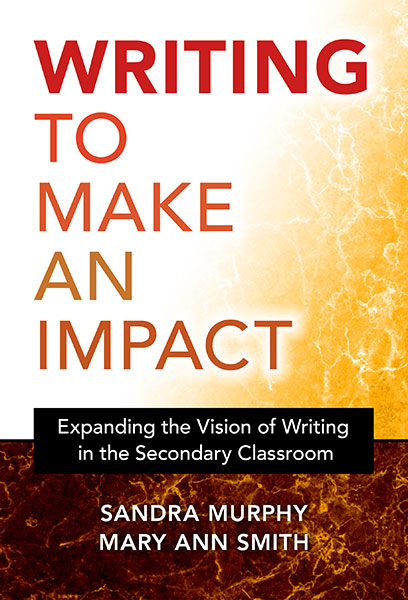 Authors, Writing to Make an Impact: Expanding the Vision of Writing in the Secondary Classroom

I believe that even the smallest voices can have the biggest impact. —Jonathan Sira

When high school senior Jonathan Sira and three of his classmates had a chance to conduct a civic action project together, they focused on what they could do to help raise the age for owning a gun. They were motivated by the personal and pressing nature of their chosen topic. “My parents won’t let me go just anywhere with my friends,” Jonathan told us when we asked him why gun violence made it to the top of their list. “Our neighborhoods are not that safe.” During the project, the team conducted a survey among their peers, interviewed a police officer, circulated a petition around campus, conducted research on recent episodes of gun violence, and presented their work to an audience of peers and visitors.

The writing from this project existed to do something meaningful —to shift the way people think about guns and to call for action. The students came to see themselves as having a civic role, a voice, and a duty. What could be more important, especially in these extraordinarily tumultuous times?

When we wrote our book—Writing to Make an Impact: Expanding the Vision of Writing in the Secondary Classroom—we had no inkling about the series of crises that would roar through our country. We did know, however, that students are eager to have a role in making change, whatever the issue might be. We also knew that writing should play a part.

We are not alone in the way we think about writing. It seems that students themselves view writing as pivotal to making an impact. When a large group of college students participating in a research study responded to the question “What is good writing?” they said it is writing you do because you want to make a difference, or as Andrea Lunsford puts it, “writing that gets up off the page or screen, puts on its working boots, and marches out to get something done!” (p. 890).

Civic action projects seem an obvious pathway to writing that has some kind of effect on the world. English and history teacher Matt Colley claims that civic engagement work gives students “a sense of agency, a sense of voice, and a structure to think about ‘how can I actually do something with the things that I’m learning.’“ According to Colley, students come to “really see school as a springboard to community engagement, as opposed to a report card grade.”

Students have no shortage of personally compelling issues to write about, given the chance and the choice. Here are a few we discovered during our classroom research:  gun violence, disability rights, Title IX discrepancies, racial profiling, preventing drinking and driving, healthcare for homeless, water conservation, legalizing marijuana, shortage of Child Protective Services workers, use of force by the police.

Most of these topics sprang from students’ own experiences in their local communities and from their purposes. Contrast these with more typical school writing topics, such as analyzing the theme of revenge in Romeo and Juliet or loyalty and guilt in Macbeth. University of California, Berkeley, professor Scott Saul (2018) calls such analyses “the industry standard” of English teaching.  At best, he says, this kind of assignment allows “students to shine new light on a formerly obscure corner of a text….” At worst, it feels “like make-work to students—something written only for the eyes of the person grading their writing.” The upshot, according to Saul, is that students write an essay because they have to for someone who reads it because he has to—“not exactly a recipe for the production of deathless prose.”

The move to writing that is meaningful to students—writing that “marches out to get something done”—is not likely to put an end to racial inequities or to senseless, tragic violence. It can, however, give students a first-hand experience with what it takes to bring about change.

Ninth grader Megan Ma and her classmates discovered the power of grassroots. This is how she put it in her written reflection:

One lesson I will take away from my action project that I can use in the future to make positive change in the community is that it is not always best to target the top, most powerful people to accomplish change, and it can work just as well, or better, to work to create change with the help of the majority…. Rather than asking the mayor to make change, it would be more effective to tell fellow citizens about this positive change and all work together to ask our city’s government to do something, as they are more likely to listen to a lot of people saying the same thing than one person.

We believe that civic action writing in school is practice for now and for the future.  Its impact can be transformative.  Take it from a parent who watched her 8th grade daughter pour her energy into writing a grant for a little free library for a small rural town in Mississippi:

I was very blessed to see a dramatic change in my daughter with her being more aware of the world and community around her. She became more passionate about discovering needs in her community and actively pursuing ways she could contribute and create change. Authentic exposure paired with research and exploration lit a fire in my child that has forever changed her perception of her role in the world around her.

We highlight civic action writing here because it’s more timely than ever. To be sure, there are other kinds of writing that have great potential to make an impact on a reader, on a cause, and/or on the writer himself or herself. Whether it’s narrative or poetry or reflective writing, the question is whether the writing exists to inspire or move or surprise or convince as opposed to fulfill a requirement for a grade.

This is a critical moment to engage students in writing to make an impact. Most of today’s students are doers, experienced with social media and involved in serious social issues. Writing gives them some way to have an impact in a world that urgently needs some doing.  We can guarantee, whether school is online or in person in the Fall, our students will need to write, to reflect, to figure things out, to make a case for rectifying injustice, and to tell their stories.

Saul, S. (2018, June 3). The story behind this site: Or, can a lecture course also be a publication workshop? Retrieved from theseventies.berkeley.edu/godfather/2018/06/03/the-story-behind-this-site-or-can-a-lecture-course-also-be-a-publication-workshop/