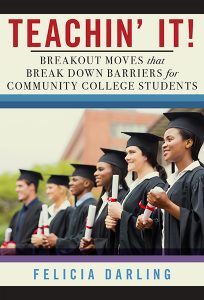 This excerpt narrates personal stories from several community college students who have been able to focus on their educational despite financial, personal, and family struggles. Drawing from Dr. Darling’s 30 years in the education field as a math and college skills instructor, teacher educator, and researcher, Teachin’ It! describes an asset‐based model that bolsters the success of all students, especially those underrepresented with 4‐year degrees. This community includes students of color, first‐generation college students, LGBTQ+ students, and students with disabilities.

“How can I create inclusive classrooms where the diverse perspectives and approaches of all students—especially those from backgrounds different than my own—are illuminated and valued?”

STORIES FROM THE EDGE

While this book highlights an asset-based model of instruction that builds on students’ strengths, classroom instruction can be improved if it is informed by knowledge of the intimate challenges that community college students overcome to learn in our classrooms. This section offers an up-close and personal look into the lives of several community college students. In this chapter and throughout the book, students’ names and other identifying details have been changed to guarantee anonymity. In each case below, the grade that the student earned is noted at the end because the achievement of a good grade despite great odds bespeaks the high levels of motivation, fierce tenacity, and resilience that community college students often bring to the classroom.

Salma Malik is a 20-year-old international student from Pakistan. She works hard in class, is quiet in groups, has a B average on tests, and has a part-time job. She shares a wealth of information about the food and culture from different regions of Pakistan and India. One day she was crying and talking on the phone outside of class. Her car insurance bill was out earlier on her desk. I figured, “Maybe her parents are mad at her for not paying her car insurance bill.” I stepped outside of the class while students were working on independent work and asked what was wrong. She gushed, “My mother died 10 years ago and I live with my dad, stepmother, and three brothers. My parents ordered me to do an arranged marriage, but I do not want to.” She continued, “I have to do what my parents say, because my two brothers will murder me if I don’t.” I walked her over to mental health services. Psychological services and the campus police worked with her to help resolve the safety issues with her family. She finished the course with a B+.

Valerie Jackson is a 19-year-old African American student who works part-time and was raised in foster care. She consistently contributes in class, asks lots of probing questions, has an 88% average, does well on tests, but has some missing homework assignments. One day it was 53 degrees in our classroom because the furnace broke and she was uncharacteristically short with me. Immediately, I thought that she must have been homeless before. I, too, was triggered by the cold in the classroom that day because I had spent time in my adult life being cold and lacking adequate shelter. On another day, Valerie missed two classes. I called and emailed her. She did not respond, so I notified the student intervention team. She got back in touch with me: “My friend lost their apartment in a fire. My car and my friend’s couch are my only places to sleep . . . so, I had to go move with them.” She had a new number and I suspected she did not have her own phone.

On Valerie’s second day back to class, a dark cloud came over her, because she had done the wrong makeup quiz and had wasted her time. She cried in my office, “My friend committed suicide and we’re not allowed to tell anyone.” As we walked the .3 mile over to mental health services, she communicated a flurry of facts. In an almost cheerful tone, she told me that she was living some nights in her car and on her friend’s couch, and sometimes she took showers at her former foster home. “When it is really cold, I can’t sleep in my car, because it costs too much to pay for gas to run my car all night.” She said this all matter-of-factly, like she did not really know that she was homeless. She must have seen the concern on my face because she started to reassure me, “Don’t worry, Mrs. Darling. I have learned how to live on less food.” All of a sudden her small stature became apparent to me. She was clearly under 100 pounds and barely 5 feet tall—exuding pride, optimism, coping strategies, and masked desperation. I walked her over to psychological services. She got a B+.

Ashley Tinder is White and 36 years old. She works part-time, attends school full-time, has perfect attendance and homework completion, experiences test anxiety, and is working on developing stronger growth mindset talk about her math ability. She has given birth three times. One baby died at birth. One was adopted by a family member, and she is not allowed contact. She is married and has a 2-year-old daughter for whom she would do anything. She is working toward a nursing degree. She was addicted to meth for 4 years and was in and out of prison for felony convictions for 8 years. She has not used crystal meth for over 2 years. She is active in the group for students who formerly have been incarcerated. She got an A.

Franklin Bearsay is White and 18 and this is his first semester of college. He is studying to become a firefighter. He is the youngest of three siblings. He works full-time, goes to school full-time, raises his hand a lot, and is eager to ask any question to help him learn better in class. He is rapidly building strong study skills, contributes a lot in groups, and is developing an identity as a competent adult learner. Last year he fled from his family’s home in a rural town, because his parents and siblings “were all doing drugs.” He told me, “My 20-year-old brother died from fentanyl overdose 3 months ago.” Therefore, he moved in with his aunt and uncle next to his community college, a county away from his home town, in order to begin classes. He passed his driving test during his first semester of college. He got a B.

Sam Siengthai is 29 and was born in Thailand. He wants to be an EMT. He lived in a Thai refugee camp before he came to the United States as a teen. He is working toward becoming a U.S. citizen. He works really hard both inside and outside of class, has an A average, and leads a study group with three recent high school graduates from this class. He works almost full-time and goes to school full-time. I credit the success of this particular section of my class to his leadership and his instilling the desire to learn in the other students in the class. He is confident and comfortable taking risks in class and making mistakes. He always offers to present at the whiteboard—especially when other students are reticent. He performs well on all assessments. He got an A.

Lisette Echevarria is a Latinx math student who does well on assessments, but has spotty attendance. About midway in the semester, she had an A average, but missed two classes in a row. I emailed her to say, “You can still pass this class if you come in to take the test on Wednesday.” She showed up on Wednesday and told me that she had written me a long email, but then she deleted it. I said, “Even a bad email is communication, and bad communication is better than no communication.” As we walked together toward class, she explained, “What I was going to write is that I am the oldest of seven children, and my mother is a single parent and unemployed. We are homeless. It is hard for me to come to class, finish this course, or even my degree, because of my family responsibilities.” She failed the class that semester, because she stopped coming to class.

Many community college instructors have seen students with similar stories sitting in their classrooms. It is humbling to consider the challenges that these students have overcome in order to learn. Instructors recognizing symptoms of distress and speaking to students, directing them to student services as needed, and simply showing by their interest that they care, can contribute in the end to the success of these students.