Why teach STEM in preschool? [excerpt] 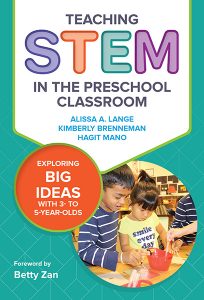 When adults think of STEM, they often relate it to complex mathematical equations, daunting engineering problems, or complex biological processes. And, oftentimes, young children have the opposite thinking. In Teaching STEM in the Preschool Classroom, the authors claim that children are natural and curious explorers of the world – particularly scientific and natural approaches. And, the authors believe that nurturing this curiosity is important in establishing STEM learning habits early on.

The excerpt below lays out the research suggesting that teaching STEM in the formative years leads to success in school later on.

WHY TEACH STEM IN PRESCHOOL?

STEM in the early years makes a difference in children’s lives. Research suggests that learning rich STEM content during the preschool years is critical to later success in school—not only in the STEM domains, but in others as well (Early Childhood STEM Working Group, 2017; McClure et al., 2017).

Research has shown that children’s knowledge and skill in mathematics as they enter kindergarten relates to how well they will do in math—and in reading—in later elementary school (Duncan et al., 2007) and in high school (Watts, Duncan, Siegler, & Davis-Kean, 2014). High-quality mathematics teaching can also develop children’s executive function skills (Clements, Sarama, & Germeroth, 2016), which are the mental processes involved in planning, focusing attention, and switching among mental tasks. Young children are capable of doing more—and more amazing— mathematical thinking than was previously believed. We know a lot about how children develop mathematical skills and understandings and how teachers can effectively foster learning (California Department of Education, 2011; Clements & Sarama, 2014; NAEYC and NCTM, 2010). Educators can use this information to help children build the strong foundation for future learning that they deserve.

Early science matters, too! What children know about the world around them by the beginning of kindergarten is related to their later achievement in other areas, including reading and math (Grissmer, Grimm, Aiyer, Murrah, & Steele, 2010), and the science children know in early childhood correlates with their science achievement in middle school (Morgan, Farkas, Hillemeier, & Maczuga, 2016). Science is related to executive function, too. Children with higher executive function skills also tend to learn more science over the course of preschool (Nayfeld, Fuccillo, & Greenfield, 2013). There also appears to be a bidirectional relationship between children’s science knowledge and their positive approaches to learning (such as being persistent, focused, and collaborative). Gains in one area are linked to gains in the other (Bustamante, White, & Greenfield, 2018). New research is emerging to suggest that preschoolers who are dual-language learners, or DLLs1, might have higher executive function than monolingual children, and therefore, science could be a particularly appropriate vehicle through which to teach and learn for DLLs (White & Greenfield, 2017).

Although preschool learning standards often do not include separate standards for engineering and technology (Massachusetts provides at least one welcome exception to this), we expect that because of the NGSS and its inclusion of engineering and technology, we will see these incorporated more into standards and into research going forward. Given the importance of flexible thinking and creative problem solving in many areas of school and life, early engineering experiences that provide children with an opportunity to work on problems collaboratively and to design solutions seem like a good bet to pay off in skills such as perseverance and collaboration as well as in STEM achievement. Emerging research in these areas has shown that preschoolers are able to engage in the engineering design process (Bagiati & Evangelou, 2016). Resources are available to explore various forms of technology in preschool (Hill et al., 2016) and to support teachers to engage in engineering with young children (see Chapter 5).

WHY INCLUDE SPECIFIC SUPPORTS FOR DIFFERENTIATION?

During my final observation this year I myself was surprised by one of my students. His ability to use rich vocabulary and to show a true understanding of the very difficult concept of life cycles amazed me. This child comes from a home where English is never spoken and yet he spent over half an hour engaged in play activities that promoted a conversation in English that was rich not only in science vocabulary but also in the way he used question words, grammar, and sentence structure in his play. —Teacher participating in STEM professional development project

We can support high-quality early STEM instruction for all learners. Many best practices for teaching children with differing levels of understanding or language development are also best practices for teaching STEM generally (for example, providing hands-on experiences in science is good practice in general and for DLLs especially). In addition, there are specific strategies that build STEM content as well as English- and home-language knowledge, such as reading books with STEM content in the home language (see Figure 1.3). The number of DLLs in our nation’s preschools is increasing (National Academies of Sciences, Engineering, and Medicine, 2017), and we need to ensure that these children have access to learning opportunities that enable them to achieve on par with monolingual peers. In addition, younger children or those who struggle with certain math or science content benefit from attention to learning trajectories as a guide for differentiation. How can we adapt a kinesthetic pattern activity (such as one using claps and stomps) for a 3-year-old who just started preschool and for a 5-year-old getting ready for kindergarten? Throughout each chapter of this book, we will highlight ways to differentiate supports for children’s learning in STEM.