“Democracy transformed from thin paper to thick action is the greatest form of government on earth.” 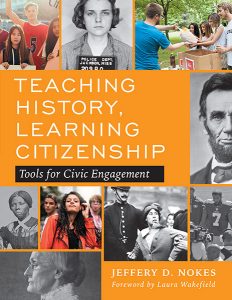 Throughout history, our leaders and icons have emphasized the importance of civic action. However, civic education is often ignored in the American public school system. In his latest book, Teaching History, Learning Citizenship, Jeffery Nokes promotes history instruction that nurtures knowledge, skills, and dispositions as tools for civic engagement. Nokes uses key moments throughout American history to demonstrate how civic engagement has always been an important component of democracy, and how it should be a core component for successful social science curriculum.

The following materials could be used in a series of lessons during a unit on the Cold War, the Reagan administration, or the 1980s. If a course is organized thematically, this lesson could be taught in connection with other lessons on the importance of working with individuals who hold different perspectives. It is recommended that at least two class sessions be dedicated to this investigation, with the first on the critical analysis of the documents, formulating an interpretation, and gathering evidence, and the second on organizing the evidence into a brief argumentative essay.

This lesson is designed to meet three objectives associated with knowledge, skills, and dispositions:

Begin the lesson by building students’ background knowledge of the Cold War and the events leading up the summits between Reagan and Gorbachev. The material provided in this chapter under the headings “Background of the Cold War” and “Reagan and Gorbachev: Adversaries and Friends” provides a basic overview of what students will need to know in order to work with the documents that follow.

The background information provided above and the documents that follow were designed to help students ask and answer the following question: How were Cold War disagreements between Gorbachev and Reagan overcome? Teachers could provide scaffolding to students by giving them possible hypotheses that they can then test with evidence. Rather than developing their own interpretation, students would then only have to choose between interpretations or combinations of interpretations such as those that follow, which is a much simpler task than developing an interpretation independently. A label for each interpretation is included in brackets to facilitate class discussion about the ideas:

The teacher could model the process of drawing evidence from the documents, by analyzing with students Document 2, a letter written by Mikhail Gorbachev to Ronald Reagan in 1985. The teacher could project a copy of the document for the class to consider together. The teacher should think aloud while considering the source (General Secretary Gorbachev), the audience (President Reagan), and the context (shortly after Gorbachev’s appointment and prior to the first summit at Geneva). After reading the source information and before reading the document, the teacher might say something like this: “I remember that this is early in their relationship, before they have met face-to-face. I imagine that Gorbachev was probably more guarded at this point than he might become later in their relationship, after they had built some trust. But I anticipate that this should be a very useful document in giving us some ideas about how they would get along.”

After thinking about the source, the teacher could start to read out loud the document for the students, reminding them that he/she is looking for evidence that supports or weakens any of the five interpretations. After reading the first line, the teacher might pause and think aloud again, saying something like, “It sounds to me like an invitation, an important starting point in their relationship—the idea that there are certain differences between their countries that they are just going to have to accept and overlook. He also implies that patience will be needed to work through these differences.” The teacher might read the next line and again pause and think about it: “It sounds like he thinks wisdom and accepting the facts will allow the leaders to cooperate. He refers to leaders in the past who have been able to accomplish some good through cooperation in spite of their differences. I wonder whether this is evidence that Gorbachev hoped that a friendship would develop between them—possibly evidence for the friendship interpretation. It shows Gorbachev’s optimism and hints at his charisma. It lacks the feeling of an iron-fisted communist dictator. I remember what we learned in the background information and this shows that he was not the cold, heartless Russian dictator suggested in American propaganda.”

Once the teacher is confident that students understand how to draw evidence for the various interpretations from the documents and how to use the graphic organizer, he/she can have them analyze the remaining documents independently or in small groups. The teacher should remind students about their objective: to gather evidence from the documents that supports or weakens each interpretation. Students are preparing to craft an argument surrounding he motivation for Reagan and Gorbachev’s collaboration.