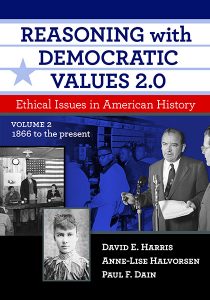 In honor of Presidents Day, we’re highlighting key study aids for teachers to use in the classroom. The activities below are centered around three major wars that the US has fought in, including the American Civil War, World War One, and World War Two.  The activities posed are not only to engage students with history, but to understand the complex ethical concepts between some of the monumental decisions in American history. Through these exercises, the hope is for students to become rational, responsible citizens engaged with their civic duties.

The following ideas are compiled from Reasoning with Democratic Values 2.0, Volume 1 and 2 by David E. Harris, Anne-Llise Halvorsen, and Paul F. Dain.

Writing assignments on  the Civil War

Lincoln’s Gettysburg Address is considered one of the most memorable speeches ever made by a president of the United States. Did the address have a historical impact beyond honoring the brave soldiers, on both sides, who died in that battle? Using online and other sources, test the hypothesis that the Gettysburg Address had a future historical impact beyond honoring the soldiers who had died in the battle. Compose a short essay in which you accept or reject the hypothesis. Use evidence to support your decision.

The defeat of Confederate forces commanded by Robert E. Lee at Gettysburg marked the turning point of The Civil War (along with the Union victory at Vicksburg, Mississippi, the following day, July 4, 1863). Had the Confederates won the battle, General Lee might have accomplished his goal of convincing the Union to give up prosecution of the war and negotiate a peace between the North and South. There are various opinions about who is responsible for the Confederate defeat in this historic battle. (Four months after the battle, President Lincoln, in what has become one of the most memorable speeches in American history, used the dedication ceremony for the Gettysburg National Cemetery to honor the fallen Union soldiers and to redefine the purpose of the war.) Some believe that Robert E. Lee is responsible for the defeat at Gettysburg. Others claim that the blame rests with Lee’s subordinates. Using online and other sources, test the hypothesis that General Robert E. Lee is responsible for the Tears of Blood defeat of Confederate forces at the Battle of Gettysburg. Compose a short essay in which you accept or reject the truth of that hypothesis. Use evidence to support your decision.

To begin your investigation, the following search terms will be helpful:
• Battle of Gettysburg
• J. E. B. Stuart
• Richard S. Ewell
• A. P. Hill
• Pickett’s Charge
• General Longstreet and the Lost Cause

Learning Activities on WW1 and WW2

Should President Woodrow Wilson have asked Congress to declare war against Germany? Why or why not?
Why did President Wilson abandon his vow of neutrality in the Great War?
What did Wilson mean by “a peace without victory?”
Why did President Wilson place great importance on the League of Nations? historical understanding
Why did Germany pursue unrestricted submarine warfare?
Why did the United States enter the Great War and what were the effects of its entry?
What were the human and economic costs of the Great War to the belligerents?
Why did the U.S. Senate reject the League of Nations?

What do the following World War Two events have in common

In 1942 Nazi leaders met at the Wannsee Conference near Berlin where they adopted “The Final Solution to the Jewish Question.” The term Final Solution was Nazi code for a plan to murder all Jews within reach. This policy of deliberate and systematic annihilation of the Jewish people was carried out in Nazi-occupied Europe during World War II. It culminated in the Holocaust, the killing of 90% of Jewish Poles and two-thirds of the Jewish population of Europe—more than 6 million Jews.

During World War I, leaders of the Ottoman government in Turkey set in motion a plan to expel and kill Armenians living in the Ottoman Empire. The killing was carried out in two phases—the wholesale killing of the able-bodied male population through massacre and subjection of army
conscripts to forced labor, followed by the deportation of women, children, the elderly, and the infirm on death marches. Many Armenians sought independence from Ottoman Turkey. The Ottoman government in Turkey regarded the Armenian minority as disloyal and as a security threat during the First World War. Killing and deportation of Armenians in Turkey began in May 1915. The New York Times reported almost daily on the mass murder of the Armenian people, describing the process as “systematic,” “authorized,” and “organized by the government.”

The Great Famine, sometimes called the Holdomor in the Ukrainian language, occurred in the Ukrainian Soviet Socialist Republic of the Soviet Union between 1932 and 1933. Estimates of the number killed from starvation range from 2 to 5 million ethnic Ukrainians. Ukrainian farmers revolted against the Soviet policy of collectivist agriculture. The peasant farmers of the Ukraine preferred their individually owned private farms to the government-controlled collective agriculture ordered from Moscow. The Soviet authorities in Moscow deliberately created the famine. All household food was confiscated by Soviet authorities, outside aid was rejected by the Soviet government, and movement of the Ukrainian population was restricted. Some scholars claim that the famine was a mass murder planned by Soviet leader Joseph Stalin to eliminate a nationalist Ukrainian independence movement. The famine took place against a backdrop of persecution, mass execution, and incarceration aimed at undermining Ukrainians as a national group.