Variations on a Blue Guitar 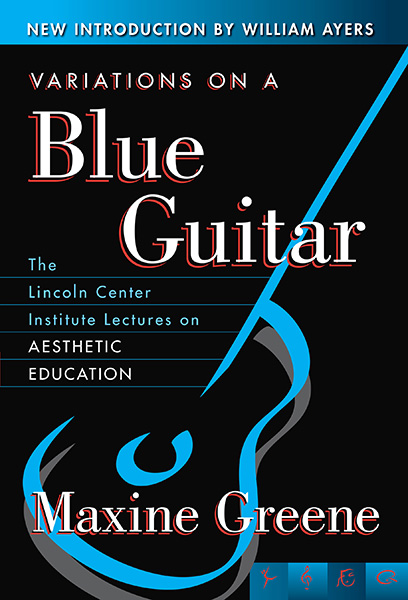 From the new Introduction by William Ayers, education activist :

“Here is Maxine Greene in full—in her astonishingly distinctive voice she urges us to challenge all the clichés and received 'truths' that clutter our minds and senses, to open our eyes!”

For 25 years, Maxine Greene was the philosopher-in-residence at the innovative Lincoln Center Institute, where her work formed the foundation of the Institute's aesthetic education practice. Each summer she addressed teachers from across the country, representing all grade levels, through LCI's intensive professional development sessions.

Variations on a Blue Guitar contains a selection of these never-before-published lectures touching on the topics of aesthetic education, imagination and transformation, educational renewal and reform, excellence, standards, and cultural diversity—powerful ideas for today’s educators.

“Here is Maxine Greene in full—in her astonishingly distinctive voice she urges us to challenge all the clichés and received 'truths' that clutter our minds and senses, to open our eyes!”
—From the new Introduction by William Ayers, education activist

"Maxine Greene has influenced thousands of educators in her role as Lincoln Center Institute's philosopher-in-residence. Her ideas are at the core of the Institute's philosophy and practice to re-invigorate education by bringing the vitality of the arts to teachers and children. For the past 25 years, those who have participated in the Institute's annual summer sessions have had the good fortune to hear her brilliant and inspiring words first-hand. The only thing missing was an encore!"
—Beverly Sills, Chairman, Lincoln Center for the Performing Arts

"It happens every time. The brilliant, vulnerable presence, the rush of language and feeling, the surprising insight, the magic leap, the pulse of engagement with something larger than one's self. Maxine's lectures fall on us with the grace of a summer shower. How splendid to relive them!"
—Thomas Sobol, Former New York State Commissioner of Education, and
Christian A. Johnson Professor of Outstanding Educational Practice, Teachers College, Columbia University

"To hear Maxine Greene talk is to have both hemispheres of your brain equally and simultaneously stimulated. She has the ability to transcend that "mythic" divide by speaking to your mind's eye and your mind's logic with words that paint vivid images as they convey philosophic concepts. Her words speak to the soul and resonate the passion and diversity of humanity. She is awesome!"
—Karole Turner Campbell, Director, Frederick Douglass Academy II, Community School District #3

“After listening to these lectures...countless teachers have asked new questions, viewed ideas in a different way, and even transformed some part of their life or work. As you enter this world, asking only one question beginning with "What if?" will set you off on the journey Maxine Greene intends.”
—from the Introduction by Scott Noppe-Brandon, Executive Director and Madeleine F. Holzer, Program Development Director, both at the Lincoln Center Institute