Student and Teacher Activism and the Future of Education Policy 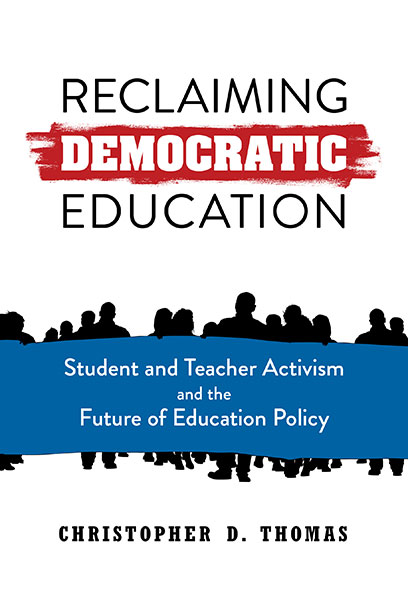 Since the spring of 2018, hundreds of thousands of students, teachers, and their allies have protested at or against their schools. These students and teachers have been protesting on a wide range of issues, from gun control and climate change to the underfunding of education and institutional responses to the COVID-19 pandemic. In Reclaiming Democratic Education, Chris Thomas examines how these activities exist at the intersection of two conflicting traditions—where student and teacher activism that aligns with the democratic purposes of public education collides with current policies that privilege the economic aims of education and restrict civic agency. By situating contemporary activism within these conflicting traditions, Thomas demonstrates how these activities constitute a rejection of the currently dominant policy paradigm in U.S. education. Thomas concludes with a discussion of how activism provides a foundation from which concerned teachers, school leaders, and policymakers can develop a new model for American education, one that reclaims an education for citizenship.

Christopher D. Thomas is a practicing attorney with Frost Brown Todd LLC, where he represents local school districts and other governmental entities. Prior to practicing law, Chris was a high school English teacher. He earned his JD and PhD in educational studies, specializing in educational policy, from The Ohio State University.

“Reclaiming Democratic Education provides us with an insightful account of the history and current status of both student and teacher activism. It helps to restore our faith in the importance of an education that is truly critical and democratic.”
—Michael W. Apple, John Bascom Professor Emeritus of Curriculum and Instruction and Educational Policy Studies, University of Wisconsin–Madison; author, Can Education Change Society?

7.  The Question Is Not Whether to Respond to Student and Teacher Civic Activism but How 117