Defending a Cornerstone of American Democracy 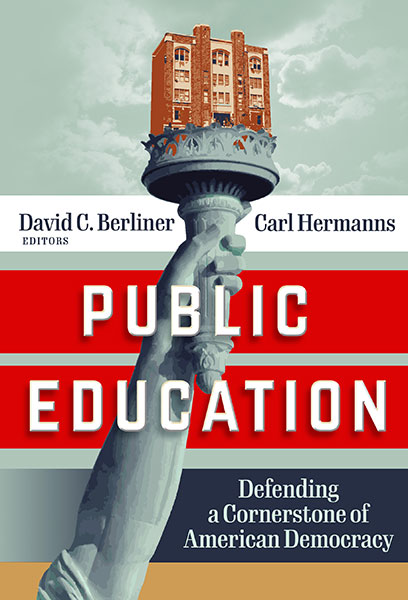 In this important collection, eminent education scholars and practitioners remind us that our nation’s system of free universal public education is under attack, putting our very democracy in jeopardy. Over and above preparing students for employability, American schools must prepare our youth to be informed citizens and active, constructive participants in the democratic process. These essayists, criticizing as well as lauding our educational system, believe that such a goal is best accomplished through a high-quality, public, and free system of schooling designed to serve all our children without regard to race, religion, gender, LGBTQ+ identity, (dis)ability, social class, citizenship status, or language. In the 100th anniversary year of the Horace Mann League, these thought leaders in education take stock of enduring principles, current dilemmas, and important forward directions. With profiteers growing in numbers and seeking to take advantage of systemic breakdowns, this book will serve as a rousing defense of our public schools for our nation’s educators, parents, school board members, and politicians.

“One can argue about the extent to which America has fallen short of its promises. But, powerful forces at work in the United States today are working to obliterate public schools and debunk the idea that every child deserves a fair chance. As noted repeatedly by the contributors to Public Education, if our public schools go down, our democracy seems likely to follow.”

“ Public Education: Defending a Cornerstone of American Democracy is a clarion call for protections and reforms to insure a sound and free public school system that will cease being a political catspaw for ambitious politicians, racist elements, and those who seek to replace history with disinformation, and the suppression of age appropriate gender issues as part of school curriculums—all in support of the prejudices and cultural biases of minorities seeking to overrule and subvert a bulwark of American democracy.”

“Editors Berliner and Hermanns gather 29 chapters authored by leading educators, activists, journalists, and researchers. The chapters contribute to an engaging discussion about the necessity of defending public education and what is needed to do so, loosely centered on the writings and political legacy of educational reformer Horace Mann, who is credited with founding traditional public schools.”

“If you care about democracy and public education, the original and compelling essays in Public Education are a must-read. Each of the essays in this collection sparkles with vision and inspiration and calls us to action. Public Education is a clarion call that reminds us the common school is a public good that serves us all.”
—Peter W. Cookson, Jr., Georgetown University

“We are at a crossroads. Do we have the will to fight for a public education that will support the democracy we claim to believe in, or do we allow private interests to continue chopping away at both? In Public Education: Defending a Cornerstone of American Democracy, Berliner and Hermanns assemble a brilliant collection of essays that wrestle with this question. Incisive, unsettling, and thought-provoking, this is a book that everyone who cares about education, democracy, or both, should read.”
—Christine E. Sleeter, professor emerita, California State University Monterey Bay

Chapters and Contributors:
In Times of Crisis, Why We Need Public Schools, William J. Mathis
A Brief History of Public Education, Diane Ravitch
Values and Education Policy, Edward B. Fiske and Helen F. Ladd
Public Schooling as Social Welfare, David F. Labaree
Reflections on the Public School and the Social Fabric, Mike Rose
Our Schools and Our Towns Belong to Each Other, Peter Greene
The Great Equalizer of the Conditions of (Humanity): How Transformative can Schools be When Society Itself Remains Inequitable and Quarrelsome?, Peter Smagorinsky
The Mythical Great Equalizer School System: Exploring the Potential to Make It Real, Kevin Welner
Democracy’s Wobbly Cornerstone: Seeking to be the “Great Equalizer” in a Deeply Unequal Culture, Jeannie Oakes and Martin Lipton
One Puerto Rican’s Reflections on What Might Have Been, Sonia Nieto
Necessary But Insufficient: Why Public Schooling Alone Cannot Equalize, Prudence Carter
Public Education for the Public Good: Black Teachers and Teaching, H. Richard Milner IV
Making the Common School Truly Common: Black Americans’ Long and Unfinished Fight for Integrated Schools, Jeanne M. Powers
We Know Better and Must Do Better, Martin Brooks
If Democracy is Such a Great Idea, Why Don’t Schools Practice it More?, Deborah Meier
The Role of Public Schools in the Preparation of Young People to Engage in Civic Reasoning and Discourse, Carol D. Lee
Tensions Between Teacher Professionalism and Authentic Community Voice in Public Schools Serving Nondominant Communities,, Ken Zeichner
Horace Mann and a New Common Good, Joshua P. Starr
Horace and George and Sitkala-Sa: Reimagining Experimentation, Jacqueline Grennon Brooks
Public School Funding and the “Reform” Distraction , Mark Weber
Education Is Our Only Political Safety, James Harvey
Is There Still a Public for Public Education?, Gloria Ladson-Billings
Public Education at a Crossroads: Will Horace Mann's Common School Survive the Era of Choice?, Carol Corbett Burris
What’s Not to Like about Private Schools?, Jack Jennings
Scrutinizing the School Choice Equity Ethos for Black Parents, Julian Vasquez Heilig
The Scandalous History of Schools That Receive Public Financing But Do Not Accept the Public’s Right of Oversight, David C. Berliner
Can Common Public Schooling Save the Republic?, D. C. Phillips
Public Schools and Acting Against the Threats to Democracy , Michael W. Apple
A New Deal for Public Schools, William Ayers